PBB Update: March 5, 2018. The Department of Education (DepEd) on Monday reported to the Committee on Basic Education and Culture of the House of Representatives that school-based personnel will be among the first to receive the Performance-Based Bonus (PBB) for Fiscal Year (FY) 2016 this March.

As of March 5, 2018, teachers in Regions I, III, IV-A, V, XI, and XII have already received their PBB, following the Department’s receipt of certificate of compliance from the AO25 Inter-Agency Task Force (IATF) in January.

A representative from the Department of Budget and Management’s (DBM) Organization, Position Classification, and Compensation Bureau (OPCCB) confirmed Mateo’s report and added that aside from the six regions, they are already processing the Special Allotment Release Order (SARO) for the National Capital Region (NCR) and Region II, which are set to get the incentive within the week. DBM OPCCB is also already evaluating the submission of Regions VIII, IX, X, Cordillera Administrative Region (CAR) and CARAGA, and awaiting the submission of Regions IV-B, VI, VII, and the now defunct Negros Island Region (NIR). 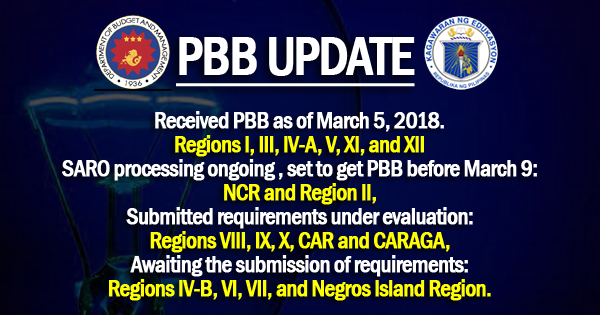 The AO25 Memorandum Circular (MC) 2016-1 prescribes the criteria and conditions for the grant of PBB for FY 2016. Given are the following requirements: 1) Department Performance Accomplishment Report; 2) Good Governance Conditions; 3) Public Financial Management Reports; 4) Agency Procurement Compliance and Performance; and 5) Posting of Operations Manual or ISO Certification. A government agency must be able to comply with all conditions in order to qualify for the release of PBB.

The Department complied with the set criteria but had difficulty meeting the pre-conditions on the Philippine Government Electronic Procurement System (PhilGEPS), the budget utilization rate (BUR), and specific Physical Accomplishments, which nearly rendered the Department ineligible. Through the joint efforts of various delivery units within all governance levels, DepEd took significant steps and actions to overcome these impediments, and in the fourth quarter of 2017, submitted the necessary documents for approval by the DBM.

The Undersecretary further noted that for the PBB FY 2017, come summer of 2018, the Department will conduct orientation on the submission for PBB.

Based on Executive Order No. 80, series 2012 (EO 80, s. 2012), PBB is “a top-up incentive given to personnel of bureaus or delivery unit in accordance to their contribution to the accomplishment of their department’s overall targets and commitments.”

Further, the grant of PBB “aims to motivate higher performance and greater accountability and to ensure the achievement of education targets and commitments under the five Key Result Areas (KRAs) in EO No. 43, s. 2011 and the Philippine Development Plan (PDP) 2011-2016.”