The Department of Education (DepEd) issued DepEd Order No. 048 s. 2018 – Prohibition on Electioneering and Partisan Political Activity as a reminder to all its officials, teaching and nonteaching personnel on the constitutional prohibition against electioneering and conduct of partisan political activity. Article IX-B, Section 2(b), paragraph 4 of the 1987 Constitution states that no officer or employee in the civil service shall engage, directly or indirectly, in any electioneering or partisan political campaign.

The Omnibus Election Code, as amended, prohibits government officials and employees from engaging in any electioneering and partisan political activity and considers the commission thereof as an election offense punishable by law. The same prohibition is found in Book V, Title I, Chapter 7, Section 55 of the Executive Order No. 292, or the Administrative Code of 1987. 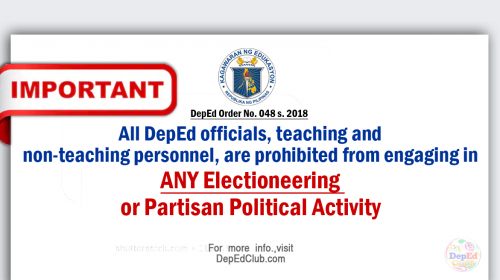 An advisory on Electioneering and Partisan Political Activity issued through Civil Service Commission (CSC) Resolution No. 1600298 dated March 29, 2016 reiterates that the prohibition aims to ensure that government workers will remain focused on the affairs of the government, to do away with the spoils system, and to shield public servants from the vagaries of politics. Enclosed is a copy of the said CSC Resolution.

In accordance with existing rules and regulations promulgated by the CSC, the Commission on Elections (COMELEC), and jurisprudence, the following are regarded as partisan political activities, which refer to acts designed to promote the election or defeat of a particular candidate or party to public office:

All DepEd officials (including third level officials), teaching and non-teaching personnel, are prohibited from engaging in any electioneering or partisan political activity, subject to the exclusion under paragraphs 12 and 14 of the attachment to the enclosed CSC Resolution.

(Exclusions under paragraphs 12 and 14 of the enclosed CSC Resolution)

DepEd officials are prohibited from using their position of authority to influence teaching and/or non-teaching personnel under their supervision or jurisdiction to support any preferred candidate or political party.

This Order is without prejudice to other circulars, advisories, or resolutions that may hereinafter be adopted by the CSC, COMELEC, and/or other relevant agencies.

Immediate dissemination of and strict compliance with this Order is directed.

Further reading on Election Offenses Punishable by Law for DepEd