Threatened by a P30 billion cut, Senate President Pro Tempore Ralph Recto today called for the rechanneling of DepEd’s 2018 budget to “low hanging fruits” which can be used to increase a number of teacher’s allowances.

If these “benefit amelioration” items will be added to the income retained when bigger personal income tax exemptions will take effect, the result is a higher take-home pay for public elementary and high school teachers, Recto said.

“We can double the chalk allowance, increase the uniform allowance, implement so-called step increments so that teachers will move up the pay scale, and increase the operating fund of schools,” Recto said.

“On top of these, new tax exemption rates so that teachers will either pay zero tax or a smaller tax on their income,” he added.

“All of the above are doable, and are in the pipeline. They can take effect in 12 weeks, or by January 1. Kaunting push na lang,” Recto said. 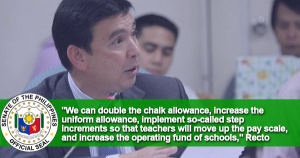 Recto said the above are interim measures until a higher pay for teachers is legislated together with the rest of government workers.

Recto said the House of Representatives, citing DepEd’s slow use of funds, had cut nearly P30 billion from the agency’s building fund for 2018.

“My proposal is that instead of transferring this money to other agencies, why not retain it there but change the intended use, toward the easy to implement, like teacher’s allowances,” Recto said.

Recto is proposing that the teacher’s annual uniform allowance be raised to P8,000, from the current P5,000. “That P8,000 is still half than what jail guards, firemen, policemen, and soldiers get,” he explained.

Recto’s proposal is P2,000 higher than the P6,000 recommended by the Duterte administration for all civilian government workers. “‘Yung additional P2,000, pang-sapatos. So clothing and shoes allowance na.”

According to Recto, another allowance long in need of adjustment is the one for teaching supplies, popularly called “chalk allowance,” which is pegged at P2,500 per teacher annually.

The government, he said, can also institute a “mass promotion” program for teachers by authorizing “step increments,” a move that will assign a teacher to a higher step in the salary grade, resulting in a higher pay.

Recto said increasing a school’s MOOE (Maintenance and Other Operating Expenses) allotment will also redound to teachers “as it will spare them of out-of-pocket expenses for school and town activities and training.”

Another “low hanging fruit ripe for picking” is the tax package pending in the Senate, which raises income tax exemption rates.

The bill sponsored on the Senate floor saves a Teacher 1 about P19,000 in income tax payments annually.

But Recto is proposing a higher no-tax zone of P250,000 in taxable income annually so that teachers with small businesses and professors in state colleges will be exempt.

2 thoughts on “Sen. Recto: Teachers Can Have Higher Allowances, Take-home Pay by Jan. 1”