MANILA — President Rodrigo R. Duterte has signed into law a bill that extends the maternity leave of female workers in the country from 60 to 105 days with full pay, Malacañang said on Thursday.

Presidential Spokesperson Salvador Panelo said he believes the Expanded Maternity Leave will not hurt the employability of women or make employers reluctant to hire them. 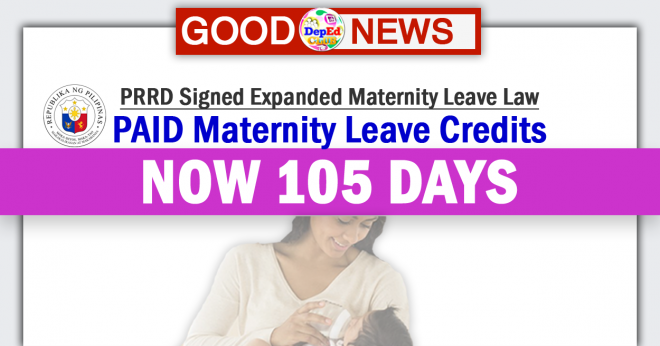 “Yung dagdag ng (the expanded) maternity leave–number of days as well as the benefits–that will only lessen the profits. Eh malaki naman talaga ang profit ng mga employers (Employers are already earning so much),” Panelo said in a Palace briefing.

Panelo noted that employers who would not hire women to prevent paying for leaves and benefits will be held accountable.

“Aba’y bawal ang discrimination sa’ tin (Discrimination is prohibited in our country), they will be accountable to that. (So) I don’t think they will,” Panelo said.

“Saka mga Pilipino (And Filipinos are), family-oriented, these industrialists, businessmen will understand,” he added.

Panelo encouraged employers to follow the new law, regardless of what is stipulated in their companies’ rules and regulations.

The Expanded Maternity law grants 105 days of paid maternity leave to all working mothers in government and private sector with an option to extend their leaves for another 30 days without pay.

The International Labor Organization Maternity Protection Convention of 2000 has set the maternity leave to 14 weeks, including a period of six weeks compulsory leave after childbirth.

Prior to the signing of the law, the Philippines is one of the ASEAN countries that have the shortest maternity leave duration aside from Malaysia.