Starting February 1 until March 6, 2020, the Department of Education (DepEd) is set to open its Early Registration desks for the incoming Kindergarten, Grades 1, 7 and 11 learners for school year 2020-2021 in public and private elementary and secondary schools nationwide.

Through DepEd Order (DO) No. 3, s. 2018, otherwise known as the “Basic Education Enrollment Policy,” Sec. Briones stated that early registration seeks to locate, identify and register out-of-school children and youth in the community who may be characterized as: living with disability/ies, living in off-grid/far-flung community; a barangay without a school, or a geographically isolated area; displaced due to natural disaster; living in an armed conflict area or area with high level of criminality/drug abuse; having chronic illness or nutritional problem/s; victim of child abuse or economic exploitation; stateless/undocumented; in conflict with the law; living on the streets; and no longer in school but interested in going back to school.

The early registration policy prescribed that registrants must satisfy the following eligibility rules:

Incoming Grades 2 to 6, Grades 8 to 10 and Grade 12 are considered Pre-Registered.

The DepEd’s early registration policy upholds the right of all school-aged learners to enroll and be equally provided with quality, accessible, relevant, and liberating basic education. 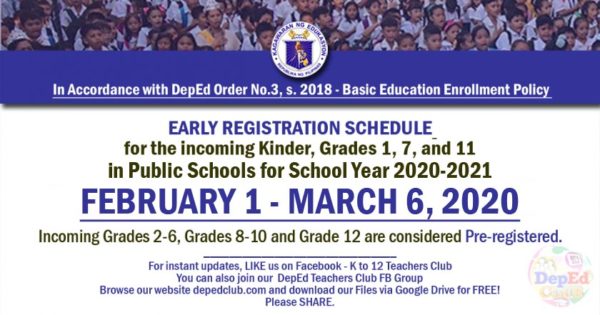 Pursuant to the Constitutional mandate of the Department of Education to ensure the delivery of accessible and quality education, it has put in place a functional basic education system. The enactment of Republic Act No. (RA) 10157 or the Kindergarten Act and RA 10533 or brought about sweeping the Enhanced Basic Education Act of 2013 changes in basic education which gave rise to the need to align DepEd’s existing processes with these reforms. The enrollment of learners, particularly the collection and management of enrollment data, is one  such process, integral in planning, resource allocation, policy formulation, and development of interventions. To align the enrollment process with ongoing reforms, DepEd has issued and implemented
several policies, such as the adoption of the Learner Reference Number (DO 22, s. 2012), the Adoption of Modified School Forms (DO 4, s. 2014, the Omnibus Policy on Kindergarten (DO 47, s. 2016), and the policy on Transfer of Records (DO 54, s. 2016). This Policy is issued to consolidate the various issuances on enrollment and institutionalize a basic education enrollment process.

All learners who elect to enroll in public schools nationwide must be accepted upon submission of the minimum documentary requirements articulated in this Policy.

Learners who wish to enroll in private schools and state and local universities and colleges (SUCs/LUCs) offering basic education must submit the minimum documentary requirements stipulated in this Policy, and satisfy other conditions for admission that the institution may require.

This Policy shall guide DepEd offices and personnel involved in enrollment in public and private schools, SUCs/ LUCs offering basic education, and ALS learning centers. This will also provide guidance to parents and learners on the enrollment process and the attendant requirements.

This Policy covers early registration, actual enrollment, Learner Information System (US) encoding, and reiteration of policies on collection of fees, among others.

Early registration of incoming Kindergarten, Grades 1, 7, and 11 learners in public schools shall be conducted from the last Saturday of January to the last Friday of February of each year.

Early registration is conducted to achieve the following:

To read more about the Deped enrollment schedule, just visit: