Following its exit conference with the Commission on Audit (CoA) last June 19, 2018, the Department of Education (DepEd) has committed to conduct further investigation and is establishing legal solutions in regard to the 820,682 Grade 2 learning materials (LMs) found damaged by water in the warehouse of Lexicon Press, Inc. – the publisher awarded with contract to re-print 2,440,336 copies of Grade 2 LMs in February 2016. 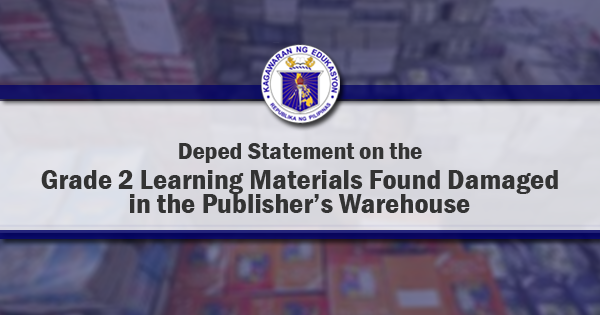 Report of DepEd’s Bureau of Learning Resources (BLR) yielded that DepEd and Lexicon mutually agreed to the temporary safekeeping of the completed LMs due to the several failed biddings for the forwarding services and for the refurbishment of DepEd’s warehouse in Taguig. Until the successful procurement of such, the completed LMs would be stored at Lexicon’s warehouse at no additional cost for the Department and would be delivered in partial to DepEd’s existing warehouses.

The report further disclosed that the partial delivery of the completed LMs started in June 2016 and the winning forwarder discovered the damaged LMs, amounting to P25,041,321.69, between January 17 and 20, 2017. DepEd received Lexicon’s report on the damage, dated January 26, 2017, on February 9, 2017. BLR promptly dispatched its personnel to confirm the extent of damage but noted that it had neither information nor control over Lexicon’s decision to dispose of the damaged LMs.

DepEd Office of the Secretary will be validating the facts from the reports of both COA and BLR. A review of the legal implications is also set. The Department continues to coordinate with the COA on developments and remains steadfast to its commitment to uphold transparency and accountability in all its transactions and in the responsible delivery of basic education resources and services. 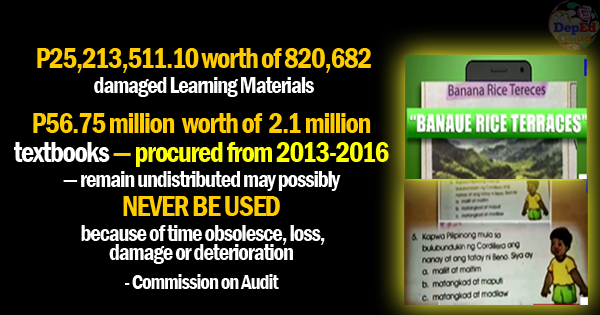