“There have been changes and there will be more changes,” Department of Education (DepEd) Secretary Leonor Magtolis Briones reaffirmed on Wednesday as the country draws closer to welcoming the first batch of graduates of the K to 12 Basic Education Program in April.

With the increasing demands of the ever shifting world, the Education chief emphasized that catching up with change can no longer be done on a “one at a time” basis. Thus, despite calls to abolish the K to 12 program, with the support of President Rodrigo Duterte and under the leadership of Secretary Briones, DepEd pushed through with the program, as it balances between solving problems of the elementary and junior high school levels and dealing with the birth pains of implementing senior high school. 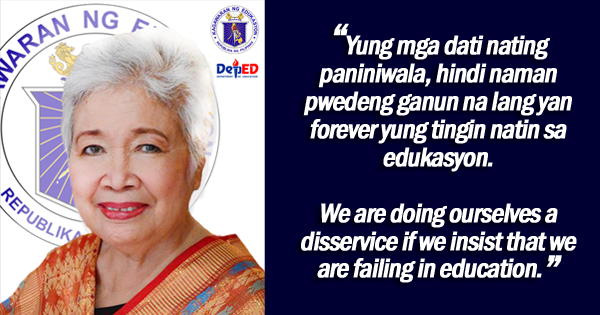 The Secretary further noted that the Department is undergoing several organizational reforms, specifically in the accounting, governance, and procurement systems, which she acknowledged as difficult but a prompt necessity.

Given the wide gap in catching-up efforts, the Secretary recognized the concern, criticism, support, and assistance of groups and individuals who stake a claim on education. Nevertheless, she underscored that the challenges do not discount the many changes that have already happened.

Amid criticisms, the Secretary encouraged stakeholders: “Yung mga dati nating paniniwala, hindi naman pwedeng ganun na lang yan forever yung tingin natin sa edukasyon. We are doing ourselves a disservice if we insist that we are failing in education. We’re doing all that we can to correct whatever [needs to be corrected]. We are not saying we are perfect or your [critics’] statistics is perfect, but we are doing all that we can and that has to be recognized!”