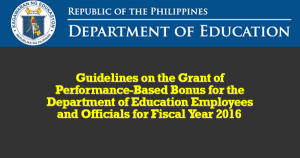 To continue reading the whole guidelines, you may click here.

One thought on “Guidelines on the Grant of Performance Based Bonus for Teachers, DepEd Employees and Officials for Fiscal Year 2016”