PASIG CITY, 16 July 2018 – The Department of Education (DepEd) and the Department of Health (DOH) pledged to cooperate in the development of two systems that shall enable the government to monitor the condition of learners previously administered with the dengue vaccine Dengvaxia.

In the ceremonial signing of the expression of cooperation held at the Bulwagan ng Karunungan on July 16, 2018, DepEd and DOH signified their intent to enter into a data-sharing and outsourcing agreement with Indra Philippines Inc., who will develop the Register, Serve, Validate, Plan (RSVP) system using the Microsoft Kaizala™ collaboration platform; and Galileo Software Services Inc., who will develop the Dengue Vaccine Monitoring System (DVMS) using their proprietary Abizo® collaboration platform. Both companies shall provide the services for free as part of their Corporate Social Responsibility (CSR) efforts.

“The mobile apps can be downloaded by parents, guardians, and even teachers to report the conditions of the learners,” DepEd Undersecretary for Administration Alain Del B. Pascua shared during the press conference following the introduction of the two applications. “Data of critical incidents will help DepEd and DOH in providing immediate treatment or observation whenever necessary. That is precisely what the Dengvaxia® mobile apps will do,” he added.

While Pascua cited the importance of registering all learners previously inoculated with the vaccine, DepEd Secretary Leonor Magtolis Briones emphasized that it is not mandatory. 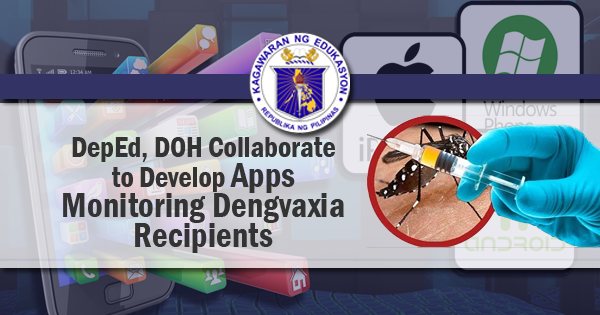 “Parents who are interested in tracing and monitoring the state of their children when they are away from home or are at school can take advantage of these two kinds of apps,” the Education chief clarified. She also called on the media to help them educate the public on the proper use of the systems.

The four parties – DepEd, DOH, Indra, and Galileo – also expressed their commitment to adhere to the provisions of Republic Act 10173, also known as the Data Privacy Act of 2012, on the sharing and processing of learners’ personal data including their Learner Reference Numbers (LRN), full names, birth dates, addresses, and vaccination histories.

“These apps are crucial to the effectiveness of surveillance and monitoring systems that the DOH has put in place. So I want to thank DepEd for this initiative under the leadership of Secretary Briones and of course, Usec. Pascua, and our partner institutions in putting together these very, very important apps,” DOH Secretary Francisco T. Duque III mentioned.

Duque further noted that the objective is “to assuage the uncertainties felt by the parents,” and added that this shall be a collaboration not only between DepEd and DOH. “DILG has to be included in the loop so that there will be more thorough and closer coordination between the service providers and the holders of the information and the database.”

The systems are set to be fully launched by the end of August.